The term smart bike is a little bit overrated. Actually this kind of bikes are only already factory-fitted with a slightly better bike computer. Cabling and possibly lighting are here indeed integrated than having supplied his bicycle manually with a cycling computer. Let’s look at how far the SpeedX Leoprad proves to be an interesting piece Bicycle technology.

As it is to be expected, Leopard is equipped with a built in bike computer. The features of the computer are likely the level of advanced conventional devices on the market. In addition to a built-in GPS, the coupling with a smartphone is just as possible as the connection of ANT + devices. The 2.4” display has a resolution of 320×240 pixels. The control conceptseems to me very smart. The controller sits on the Ahead-Set-screwing of the stem. Touchscreens are sometimes not the last word and partly only difficult to operate.

The exciting key value of the SpeedX Leopard is the wiring. In addition to the cable layer for the computer unit, the makers of SpeedX have postponed also all gear and break cables internally. Not one can be seen. The Lepoard is therefore a wonderful cleaned road-bike. Normaly, you can get these feature only in much higher price ranges. The brakes are as far as possible outside the visible range. That has not only optical, but also aerodynamic advantages.
The trimmed to aerodynamic frame is made of T1000 X Carbon. “Military grade” is promised. But that sounds more martial as it is. Let’s hope that the frame with respect to durability and stiffness may compete with the frames of established manufacturer.

The rest of the equipment sounds promising. In the “low-cost” version is a complete Shimano 105 installed. This should fit for 95% of all amateur cyclists. But whoever wants something exclusive can also support the “Pro” version. It comes equipped with a complete Ultegra Di. Only the quality of wheels I’m not able to judge. The wheels comes similar to the frame also from SpeedX.

Both versions are not very light weight. The Leopard weights around 8.4 kg and the Leopard Pro puts 7.9 kg on the scales. Sounds a little bit heavy for a modern road bike but from my perspective, most amateur cyclists should better loose some of their own weight, rather than invest some additional grants to same one or two kg. After a look at the price every one should be aware that even SpeedX can not perform miracles. But no matter, the main thing, the appearance fits. And in my view the leopard  is a direct hit.

With $ 1,199 for the early bird Leopard we have here a really cheap deal. Alone, the 105er cost over 400 $ if you buy it by yourself. Of course, you have to plan with shipping, customs and taxation. And where do you get a road bike with an Ultegra Di2 equiped for under $ 1900? Let’s hope that the price is not an indication of unfair intentions. On the other hand, if for example the Van Hawks look at, it seems quite possible to bring a carbon bike for such prices on the street.

Will the SpeedX be good to ride? A good question. Without a test drive I don’t think that anyone can say something about it. After all, there are various frame sizes. SpeedX is providing an app which should be able to determine the right size. Just make a picture from yourself… A clever way if it works.

Even if the SpeedX is a sportive bike, the schedule sounds too sporty for me. They’ve just completed the third prototype of the bike and the computer. I think it is a little too ambitious, if they wants to go into mass production as early as July. Every supporter of the project should probably expect not to hit the road this season. That’s just one of the risks that you received by crowdfunding projects. 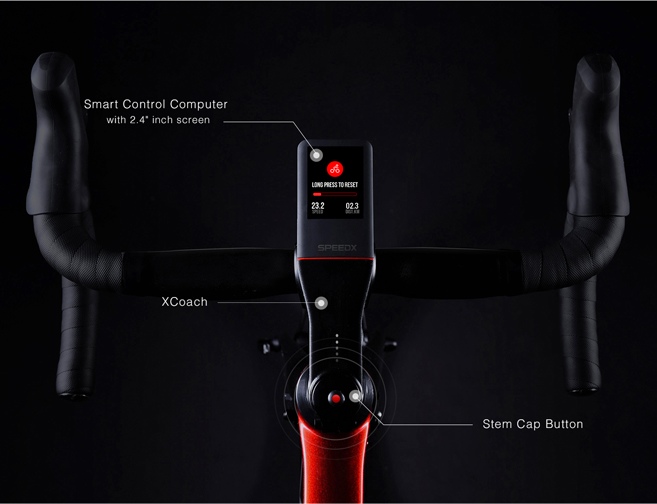 The control center of the Leopard (image: kickstarter/© SpeedX.com)