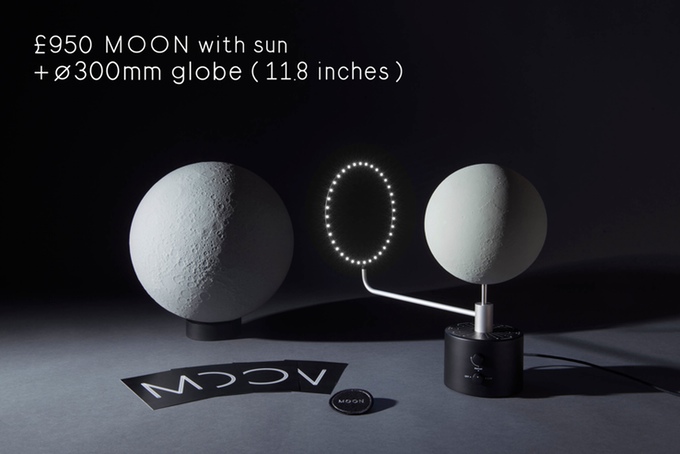 It was always a little bit expensive to fly to the moon – MOON, the moon globe (image: kickstarter/© moonproject.space)

Not only since Pink Floyd we all wondered what can be found on the dark side of the moon. Ok, if the  Nazis established their hidden base there, we will probably not experience with MOON, the highly detailed lunar globe. But at least it gives us an as yet not seen view at the moon and so, it is not made of cheese.

Moon globes themselves are nothing new. Most, however, are representative of the flat variety. That was so far rather unspectacular. Only the light play of shadows around the crater should wring the necessary dose of fascination to the non-astronomers.

Without light there is no shadow and so each MOON comes with an LED ring to simulate the sun’s light. This looks very cool. But what’s about the moon phases?

No problem. The base consists of a computer-controlled mechanism which will always maintain the position current state of the light. Of course it is necessary to look always from the same position at the globe to have a good simulation so don’t walk around. In the real world it isn’t possible neither (ok, except a handful of astronauts).

Those who want to resist the temptation of walking around the MOON can now also mounted it on the wall via a Strechgoal reached wall shelf. Well, mounting “The dark side of the moon” on “The Wall”…. Ok, enough Pink Floyd allusions.

Unfortunately the MOON is not a really cheap fun. Moon and Sun costs in the small diameter currently £ 500. The large version hits a £ 950 in your pocket. So is more for the lunatics among us.

After all, it seems to me, that the targeted delivery date by early 2017 is plausible. While they are still working on the final prototypes, the technical effort seems to be suitable.