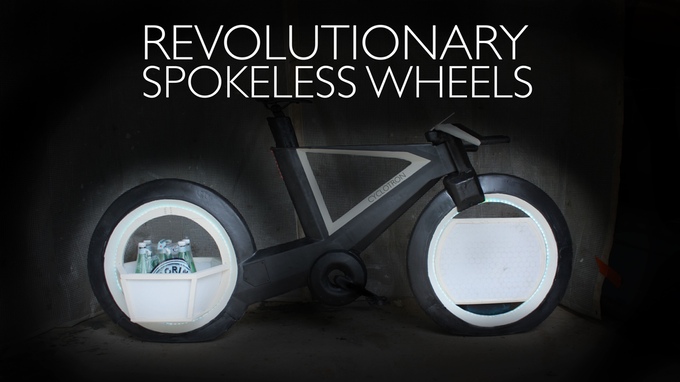 So futuristic that we will probably have to wait a long time for it – the Cyclotron Bike (Picture: kickstarter / © Cyclotron Cycles)

Here is a perfect example of a project that will definitely won’t be a successes. The CYCLOTRON BIKE looks really very spacey. How can’t you think about the movie Tron, when you look at it?

In addition to the lighting concept, of course, you will at first notice the lack of spokes and hubs. The rest is formed like a stealth fighter from the 80s. So controls you should have no problems with radar controls.

The spokes loose wheels can accommodate luggage if required. Nice idea, but not the first to come up with it. Just take a look at the TraSport-Bike.

The lasers that project a virtual lane boundary on the road we have also already seen.

Of course, the CYCLOTRON BIKE is intended as an e-bike with automatic and comes in addition to a manual 12-speed version. Smartphone-coupling is also on board.

All the fun should just put 12 Kg on the scales.

Who wants to can even order a sidecar too (just for kids).

Prices start somewhere at $ 900 and then capped at $ 2700th Shipping, customs and taxes come naturally on top.

And now we come to the big catch. While there is apparently a prototype in scale 1: 1, I have serious doubts that it can drive even a inch. If you look at the close-up, I’d rather think of a well-made fretwork with extensive use of a 3D printer. The video shows the prototype not for a second on the move. Just 3D renderings.

Don’t want to know where you can get new coats (Image: kickstarter / © Cyclotron Cycles)

While the 3D model looks stylish, every product design student in the  3 semester should be able to build this up. And even if you were able to build a prototype that includes all promised features, I can not imagine that the design could be implemented at the prices as a series product. Absolute everything has to be constructed new from scratch.

That means for every little part has to be constructed and build with a considerable high development effort. I will not even mention the the cost of injection molds, the timing and speech problems with companies who will build the parts. By this, many start-ups have already failed with considerably less complex projects.

If the bike should eventually reach the customers and then even rudimentary has something to do with what is presented to us here, I’ll eat my hat.

So we can see again her the problem with crowdfunding. The greed that is triggering a cool idea is often greater than the mind. Think, before you pledge.

Maybe I’ll risk a $, get me a bag of popcorn and watch the spectacle with indulging in a little shudder. 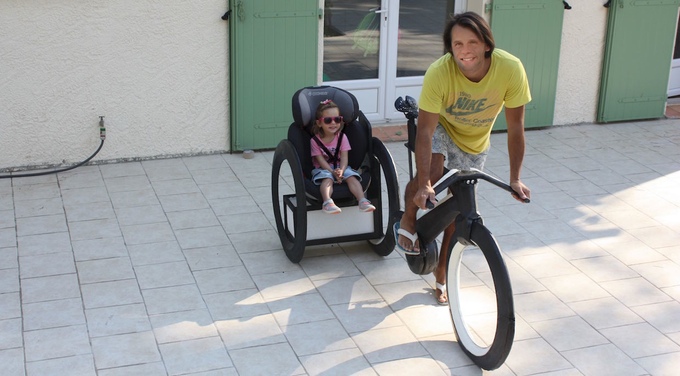 Fortunatly the prototype is stable enough that someone can sit on (Picture: kickstarter / © Cyclotron Cycles)

The CYCLOTRON BIKE is a futuristic design study, which in my opinion can not be implemented in a real series product at that price. No working prototype. Hands off.